The morning of Tuesday, 12th July 2016 saw me in a somewhat sunny Brighton. It was my first time at a CILIP Conference and this year's event was held at the Brighton Dome. With over 500 attendees, it was certainly the largest conference I have ever been to. Many thanks to my employer who sponsored me and to my colleagues who held the fort while I was away. The event saw me posting more tweets in 2 days than I have in 6 months. An account of events throughout the conference can be grasped by going through the tweets that were posted #CILIPConf16 as well as the presentations.

The breakout sessions were based on three themes (Managing Information, Everyday Innovation, and Using Technology. One of the challenges I faced was deciding on which events to attend during the breakout sessions. I was torn between attending sessions within my sector which captured my interest and those from other sectors which intrigued me. In the end, I decided to go for a mix.

The conference was opened with a welcome from Nick Poole, Chief Executive of CILIP. He made reference to the CILIP Action Plan for 2016-2020 and the current consultation on the new membership model for 2018. He also stressed the need for an information literate population and the role Librarians will need to play to facilitate this. The wow moment for me was the opening keynote. I found Scott Bonner, the Director of Ferguson Municipal Public Library, to be such an inspiration who delivered some home truths about the need for us as Librarians to step up to the plate. He narrated how the Library stepped in following the death of an unarmed black man called Mike Brown in 2014. He stated that the mandate Libraries, especially in the public sector should be lifelong learning, cultural literacy and being the center of the community. Many examples were given of instances where the Library can step in when the community needs a hero. It centers around what we often do on a day to day basis. #whatlibrariesdo "Normal in libraryland is pretty darn awesome," his words. He emphasized the need to have faith in ourselves and the Library mission because doing something wrongly is better than doing absolutely nothing at all, especially in a crisis.

I attended the Everyday Innovation breakout session chaired by Alison Wheeler. Here Amy Hearn and Tiffany Haigh from Kirklees Council Libraries presented on Family storywalks organised by the Library as way of taking books and reading out of the Library space and engaging with nontraditional users. The Director of Library and Learning Services at Bath Spa University, Alison Baud, also presented on the Read and rights campaign which crowd-sourced ideas for a digital timeline to encourage reading and debate around diversity and equality. John Vincent from The Network discussed the CILIP Libraries Change Lives Award-winners focusing on some innovations that were recognised in the early stages and are still quite successful today such as the 1995 winner BookStart. 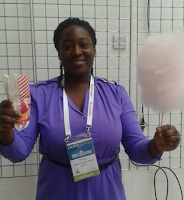 This was followed by a fantastic Lunch after which I discovered a booth for candyfloss and popcorn hidden among the exhibitors. I attended the parallel session Prof. Graeme Dewhurst, Sue Lacey-Bryant and Patrick Mitchell discussed the importance of embedding best evidence in everyday clinical practice and the pivotal role health Librarians play in bringing evidence of best care from around the world to the bedside. The launch of the Professional Knowledge & Skills Base for Health was mentioned as well as The Learning Zone which is open to anyone. I made my way to the Your Career session where the making of the CILIP Leadership Programme was discussed as well as the projects that were completed. Some of the participants also of the first pilot which was just completed and the ongoing HEE Knowledge for Healthcare Leadership Development Programme also shared their experiences. The Using Technology session was my next event and Adam Koszary shared about how the Bodleian Libraries make use of social media to engage with users via 4 major platforms (Facebook, Instagram, Tumblr, and Twitter). Lara Dodd from Northumbria University also gave a really interesting talk about the importance of data literacy for teenagers. It brought to the forefront of my mind the fact that teenagers are not always equipped to differentiate between good and bad information online.

The conference closed for the day and there was a party on the pier in the evening. There were lots of interesting activities such as Human Bingo and free rides. I was even persuaded to pay a visit to the Horror Hotel. A decision I instantly regretted and will ensure never repeats itself. More than anything else, it was refreshing to socialise with colleagues and suppliers outside a professional setting. Day 2 was sure to be just as eventful.
Posted by abombolo at 05:47